One Century Later, A Family Ring Continues to Evolve

Almost 100 years old, a special piece of family history is still being passed through the generations, being updated each step of the way. Alice and Andy came to The Village Goldsmith with their family heirloom ring, wanting to continue the tradition of personalising it with the receiver’s birthstone.

In 1927 Andy’s great-grandfather, Robert, gave his great-grandmother, Ida, a rose gold band on their wedding day. As Ida and Robert only had sons, half a century later it was given to their 18-year-old granddaughter, Ronda - Andy’s mother and Alice’s mother-in-law.

When Ronda received the ring, she added two small diamonds and a garnet gemstone (Ronda’s birthstone), making it a three stone dress ring. Fast-forward to 2020, Ronda gifted the ring to Alice, her son’s wife. Alice felt it was a great privilege inheriting this special piece of family history and wanted to honour Ronda’s tradition by remodelling the ring to incorporate her birthstone, topaz, into the design.

Alice and Andy met with The Village Goldsmith’s talented designer and master craftsman, Ben, with whom they discussed the ideas for the ring’s new design. It was decided that the original rose gold band would remain the basis for the ring, and the setting would be created with new gold.

Once Ben had created a design which reflected their ideas, and Alice and Andy were happy with it, he got to work with handcrafting and bringing the ring to life. To begin the crafting process Ben had to first remove the garnet and diamonds from the ring and detach their settings from the band.

Rolling out the new metal, Ben hand-formed the pear shape setting and inlaid three carefully positioned claws, which would hold the peach toned topaz in place.

After the new setting was crafted, the band was measured and cut so that the pear shape setting could fit snugly in place. Using the remainder of the specially alloyed gold, the shoulders were crafted and carefully soldered onto the band.

The ring was then passed to our master setter, Adrian, to have a total of six diamonds set into the shoulders – three on each side, and lastly the beautiful Imperial topaz was carefully set into place. 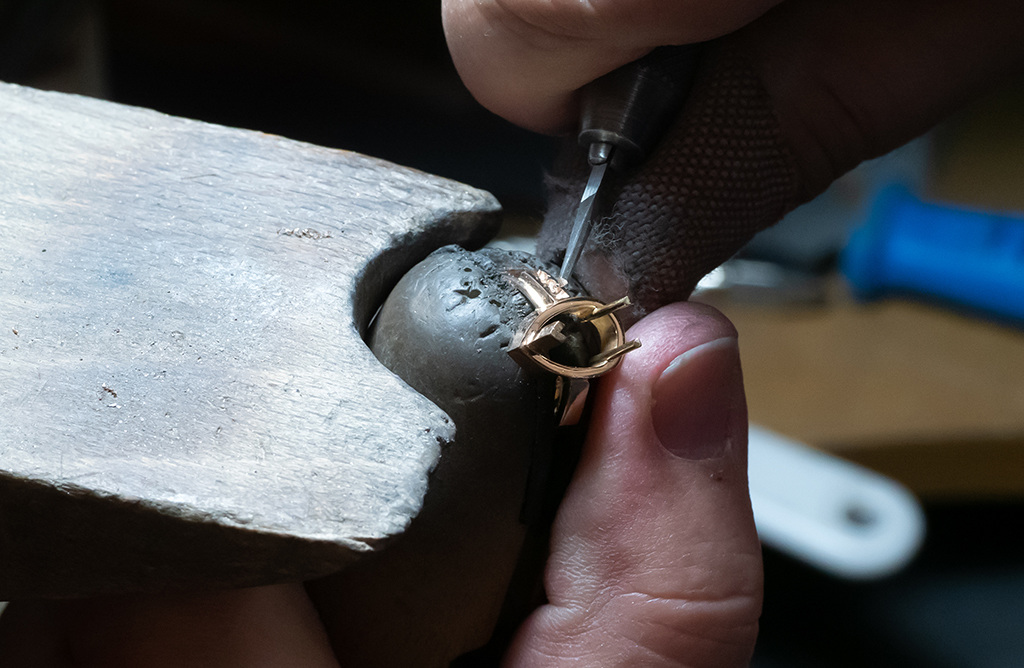 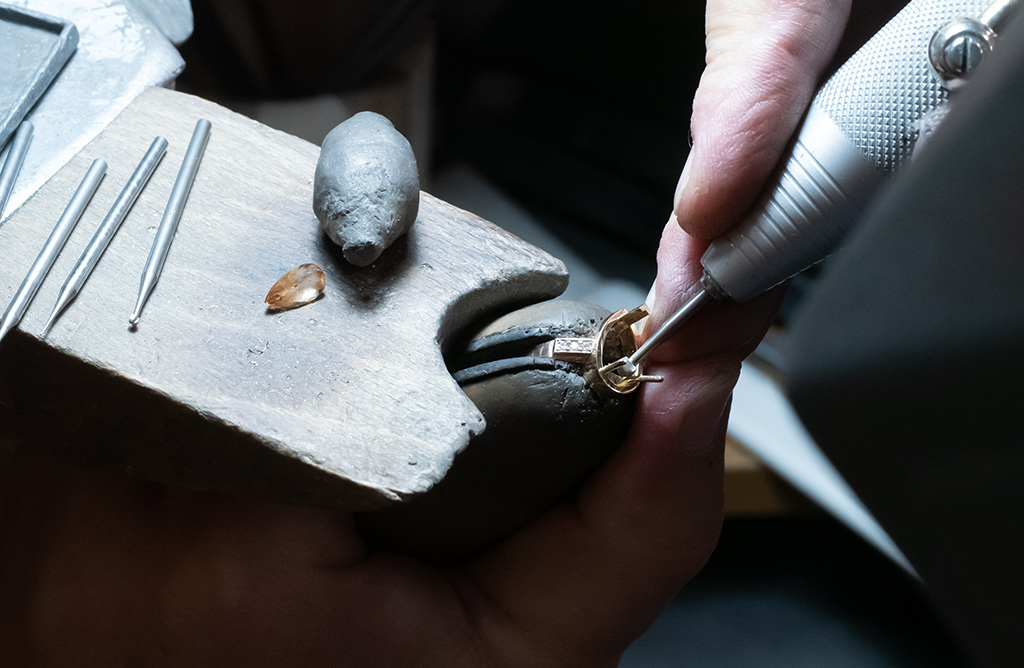 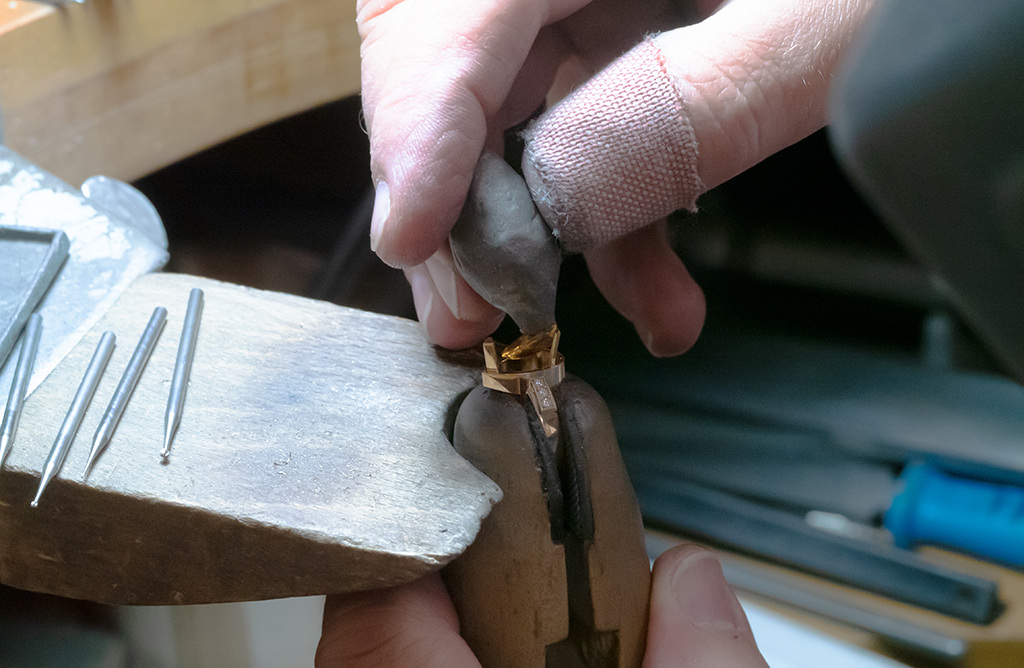 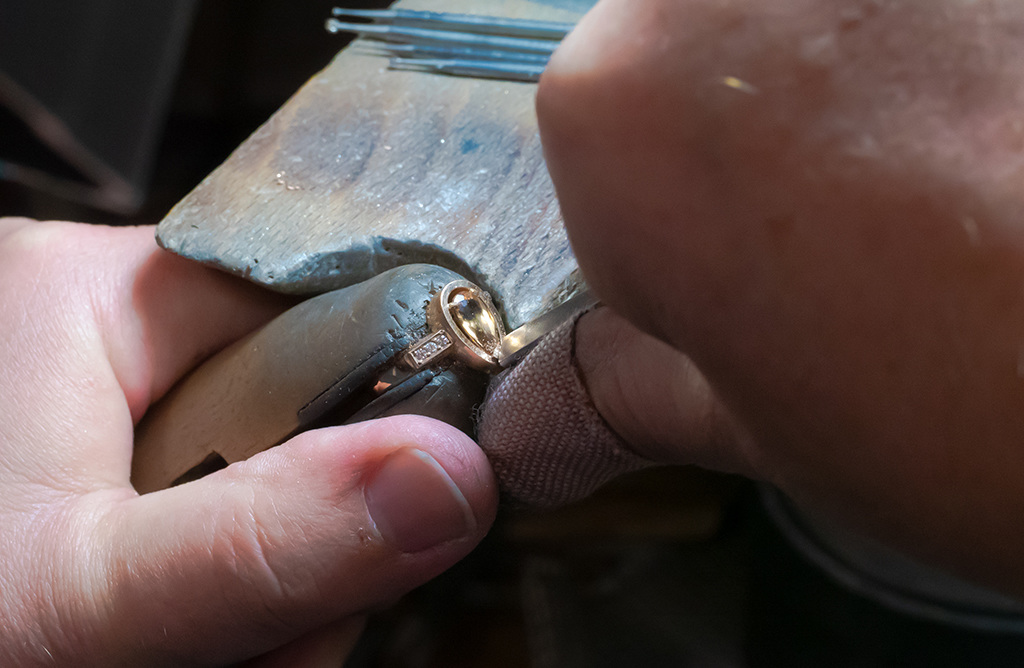 After the precious gemstones were set, the ring was given a final polish and inspection before being presented to Alice and Andy. The ring will be enjoyed by Alice and then when the time is right, passed down to the next family member, who will be able to remodel it to feature their very own birthstone.

“The ring is absolutely gorgeous you did an awesome job. You have always done amazing work; this is the third custom piece you've made for us!” - Alice

Looking to repurpose your own piece of jewellery, or design your dream piece? We listen to your ideas, wants and dreams to bring your very own personal piece of jewellery to life. Specialising in custom bespoke jewellery, and with a combined average of 30 years experience, our award-winning craftsmen can turn your ideas into reality within our on-site Wellington workshop, get in touch with us to begin the process.

Read other remodelling jewellery stories from The Village Goldsmith: