We can all learn something from Liz and Jim, who learnt from honey bees that life is short, make the most of it and don’t waste a single moment.

"We'd both had health scares, so we thought:
'life is short, better to make the best of it while we still can
and make the rest of our lives full of happiness'."
- Liz

Liz and Jim recently visited The Village Goldsmith with an enquiry that we get often, to remodel an item of jewellery into an entirely new piece. Their story was truly unique.

The couple first met in Australia in 1970 and instantly knew they were made for each other. Shortly after they met, Jim, an Italian/American, had to return to the US army in Vietnam.

Liz and Jim kept in contact with the only option they had; military mail. They had to wait an agonizing three weeks to hear back from their other half, all the while not really knowing what was going on in each other’s worlds.

It was tough, but it made them realise that there was no time to waste. Whilst Jim was on a 30 day leave in Wellington, he and Liz met up to travel around Liz’s home country a little. It was when they got to Dunedin that Jim proposed.

They were only just engaged when Jim had to return to Vietnam. They tried to stay in touch the best they could, but times were tough, and the pair drifted apart. Liz still had the ring, which she held onto fondly, even though she and Jim had lost touch. After years of no contact, Liz was still unable to completely let go. She describes the passion she still felt for the one that got away: “he was the love of my life and I never forgot him.”

48 years on, with the help of Google and Facebook, Liz and Jim were able to reconnect. With no more air mail holding them back, instant messaging meant they no longer had to wait three weeks to hear from one another.

Liz and Jim were in constant contact from January of 2018 right through to September, when they organised to meet up in Maui, Hawaii... halfway between New Zealand and the United States. After they had reunited they knew they couldn't let each other go again. Jim re-proposed there in Hawaii. Soon after, in November, Liz left New Zealand to join Jim in the US. They haven't spent a moment apart since.

Once the newly re-engaged couple were together in the United States it didn't take long to officially tie the knot. The couple got married in Massachusetts with the ring that Jim used to propose to Liz back in Dunedin in 1971.

However, being from different countries, and residential rules and restrictions becoming tighter, the couple have been struggling to settle down in one place. Because of this, they found themselves in Wellington, New Zealand, with Jim on a 90 day visa. This is when The Village Goldsmith was given the opportunity to do what we do best: create wonderful bespoke pieces that represent beautifully unique stories.

Liz and Jim came to The Village Goldsmith with their original ring from 1970 - the same then used to officiate their recent marriage - in hand. Steve, one of our master craftsmen, sat down with the lovely couple to discuss their thoughts and create sketches of concepts. They asked Steve if it would be possible to melt down the gold of the original ring and use it to craft a new wedding band.

However, their request didn’t quite end there... and this is where the significance of honey bees come into their story. Liz loves honey bees: she is obsessed with them and collects anything bee related. Ironically though, Liz is allergic to bee stings.

They wanted the significance of bees to be represented in their love story, and therefore in their wedding rings. Being a loyal customer of The Village Goldsmith for quite some time, Liz was adamant that we would be the jewellers to craft the ring she had envisioned.

Steve listened to the couple and began refining their ideas which would enable us to create their perfect rings. Rings that they’d only so far as dreamed of.

Liz was certain that she wanted the pattern of honeycomb wrapped around her ring, but they also needed to decide how to incorporate this into both of their rings.

The role of creating the wedding rings was then given to Luke, one of our master craftsmen at our on-site workshop.

The yellow gold of the original engagement ring was melted down and used to craft Liz’s ring. After the rings were crafted, they were given to one of our talented CAD designers, Mike, who took on the challenge of creating the seamless design of a tessellating honeycomb pattern. The aim was to enable the honeycomb pattern to perfectly wrap around the ring, without being able to detect where the pattern begins or ends. Creating such an effect took a lot of time and dedication as well as a lot of mathematical trial and error attempts. Finally, Mike had determined the exact configuration needed to create the perfect design.

Mike, one of our CAD Designers, working on Liz and Jim's Bee Honeycomb Wedding Rings

Once Mike had created a vector image that could be used to laser engrave the honeycomb pattern onto the ring, Luke was given the task of bringing the idea to life. He took great care when arranging the laser engraver and creating the delicate look of honeycomb around Liz’s band. It is a precise job that requires a keen-eye for detail and was pulled together perfectly.

Jim’s ring was a beautifully finished white gold ring the same width as Liz’s. His wedding ring also incorporated the honeycomb pattern through an embossed laser engraving on the inside of the band.

The end result was flawless and features such intricate designs produced by our talented team. Everyone successfully put their specific skills into the crafting of Liz and Jim’s wedding rings, the outcome perfectly illustrates the high level of expertise we pride ourselves on. 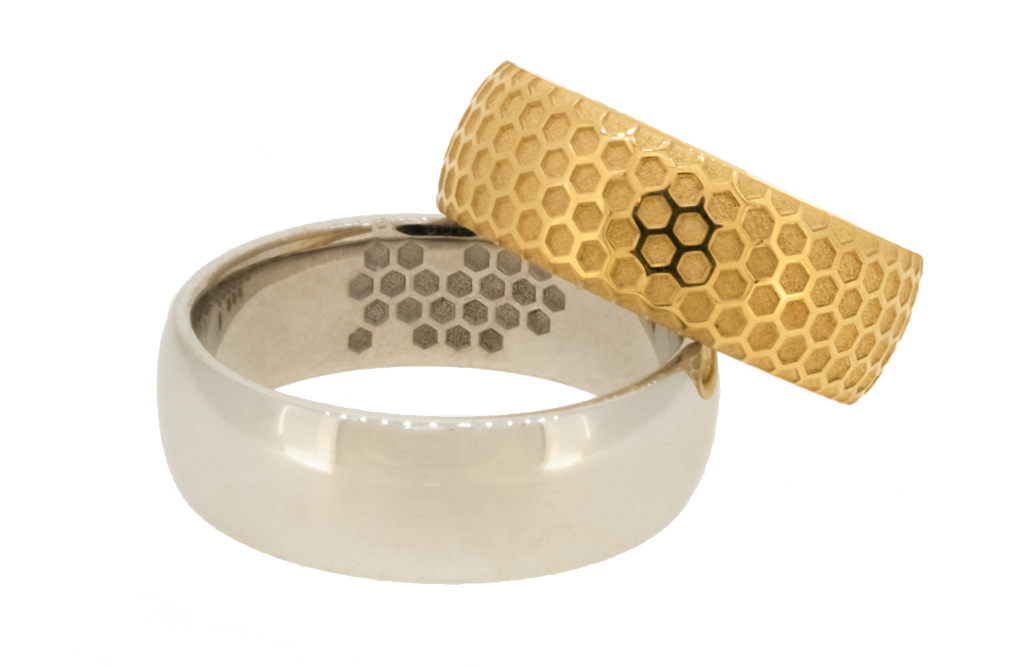 The passion and dedication put into this creation is not only reflected in the intricacy of the rings, but also shown in the journey that will now hold a special place in their hearts.

Congratulations to Liz and Jim for finally finding each other and tying the knot after all these years. Thank you for sharing your magical journey with us.

Inspired by this story and want to design your own personal piece of jewellery? Find out more and enquire about creating your perfect custom bespoke jewellery item with our experienced team of designers and master craftsmen.