Why We Choose to Craft Jewellery with Natural Diamonds, Not Lab Grown Diamonds

Whilst natural diamonds generally increase in value, lab grown diamonds are already declining in value. This is a replay of history when synthesis was first developed for corundum; the resultant rubies and sapphires were closely priced to naturals. They’re now almost worthless in comparison. It is our opinion that the decline in price of factory-made diamonds will be slow but inevitable as the science and ability to manufacture them more cheaply increases.

As manufacturing jewellers, we are passionate about transparency and sharing with you our whole creative process. You are welcome to come in and view our workshop any day of the week and watch your special item being crafted. The same goes with the diamonds we use in crafting jewellery for you. We’ve gone to great lengths to select and track their journey to you.

We’ve chosen as a company to only use natural diamonds and not lab grown diamonds in the jewellery we craft for you. Here’s why:

Lab-grown diamonds have a negative effect on the environment through energy-use; founder of ADA diamonds – a lab-growing diamond company – has said that the majority of lab-grown diamond factories use about 750 kWh of energy per carat of diamond. According to research by Electricity Authority New Zealand, this amount of electricity consumption for a single carat of diamond, is equivalent to almost a month and a half's worth of electricity consumption for the average household in New Zealand. While the amount of energy consumption it takes to mine diamonds varies, it is still significantly lower to that of lab grown diamonds. An environmental professor at the University of Delaware, found that Australia’s Argyle diamond mine uses 7 kWh to produce 1.00 carat, and De Beers’ operations use 80.3 kWh per carat.

In addition to the significant amount of electricity required to produce lab grown diamonds, the most common method for creating lab-grown diamonds is through a method called high pressure, high temperature (HPHT).  Most diamonds grown via the HPHT method are produced in China, a country which sources 55% of its power from coal-powered systems, and 20% from hydro-produced electricity. In contrast, modern diamond mining is done under very strict environmental laws, and most water is treated and recycled – DPA (Diamond Producers Association) members have a water recycling rate of 83%.

We do not look solely at how much electricity is consumed per carat of diamond and compare these between lab-grown and modern mined diamonds. Other members are also actively working to reduce their carbon footprint and energy consumption by using renewable energy sources whenever possible.

Rough diamonds before being mapped, cut, and polished - from our trusted diamond suppliers.

Both methods of diamond sourcing generate several job opportunities and in turn create an increase in employment levels, natural diamond mining though is doing so within many third-world countries, such as Botswana and other African countries, giving those who would usually experience high unemployment levels a chance to earn a decent income. Modern diamond mining provides safe, high-quality and high-paying jobs – 10 million people are employed by the diamond industry across the world. The cutting and polishing of gems also create huge employment and growth opportunities for hundreds of thousands more in developing countries around the world.

As an example in Botswana (the world’s third largest producer of diamonds) diamond activities generate 38% of the GDP, 80% of export revenue and 50% of government income. Since discovering diamonds Botswana has gone from “recording one of the world’s lowest per capita income figures of $70 to a middle-income level category of USD16,300 within a few decades ... Is this an African success story? In many ways it is. Botswana’s distribution objectives include free basic and post-secondary education, zero-cost healthcare and land plots for residence and farming purposes.” (Hanson, 2007)

Fashionscapes, a set of documentary films created by Livia Firth, wife of actor Colin Firth, and co-founder and creative director of sustainability and communications consultancy ‘Eco-Age’ explores the diamond industry in Botswana. Firth was nervous prior to visiting Botswana, as so far in her ‘Fashionscapes’ journey she has been greeted with an imbalance within the fashion industry and its correlations to sustainability. When visiting Botswana, and speaking to various stakeholders who contribute to the diamond industry, such as Botswana’s president, Mokgweetsi Masisi, she was pleasantly surprised with how the diamond industry is positively affecting the community of Botswana.

Upon reflection of her visit, Firth says “Here in Botswana, I’ve seen a picture of what can happen when businesses operate in partnership with government and civil society, and where long-term investments are made in collaboration with local communities to ensure that the benefits are truly shared with those on the ground,” Firth added. “I came here to look at a single supply chain. But as my visit ends, I wondered if Botswana represents something even bigger — a new vision for doing business, and if so, it is certainly something that should be protected with vigilance and integrity.”

The following video is episode three of Fashionscapes, named The Diamonds of Botswana. It helps to visualise the diamond industry in developing countries, who are using the industry to build their community from the ground up. We strongly encourage you to watch it and learn more:

All the diamond companies we deal with have strict adherence to the Kimberley Process and can guarantee that their diamonds are ethically mined and traded. We like to ensure these practices by only purchasing diamonds which have transparent records and documentation. This way the entire journey of the diamond, from the mining of the rough crystal, to cutting, polishing, examining, grading, and supply, can be tracked and followed throughout. An example of this can be viewed here with a Diamond Traceability report.

Blockchain technology is currently being implemented where the diamonds journey is recorded on a common ledger which can’t be altered to tampered with and thus further guaranteeing the supply chain.

It is a common goal within many diamond mining companies to improve the communities in which they mine their diamonds. 60% of the total benefit created by diamond mining is given and put back into the local communities where the mine is located.  Many diamond companies are heavily involved in the communities where their mines are based, and create further schooling and education facilities for people within the community who wouldn’t have access to these opportunities otherwise. Other community benefit opportunities also produced by the diamond industry include, but are not limited to; social programs, recreation activities, and even healthcare facilities. In 2016, the amount of economic benefits produced by the diamond industry retained by the communities where diamond mines operate, was US$16 Billion.

Our concern is that lab grown diamond companies often have claims of “eco-friendly" methods, but are often not supported by facts. Arguably in many cases lab grown diamonds are more environmentally damaging than the mining and production of natural diamonds.

A lab grown diamond is not one-of-a-kind in the same way that natural diamonds are. Each natural, earth-mined diamond is a unique miracle of nature. Lab grown diamonds, on the other hand, are mass-produced in factories, they are also created in weeks, whereas diamonds created in the earth’s crust are organically formed by nature over a long period of time: between at least 900 million to 3.3 billion years.

In addition to these reasons, our main concern surrounding lab-grown diamonds is the value retention aspect. We do not believe that these gems will retain their value, and do not feel they warrant the investment. There are many other substitutes, at much less cost, that serve the same purpose. If you desire a beautiful diamond, why not choose a real one?

As a company, we have considered alternative diamond options at length, but we’ve found the reasons to choose ethically sourced natural diamonds over synthetic or lab-grown diamonds are plentiful. Here at The Village Goldsmith, we are committed to providing natural diamonds of the highest quality, that have a guaranteed chain of provenance and are sourced and processed from trusted and reputable suppliers. We deal directly with diamond manufacturing companies around the world and visit their operations to witness first-hand the careful and stringent process that goes into each individual diamond. 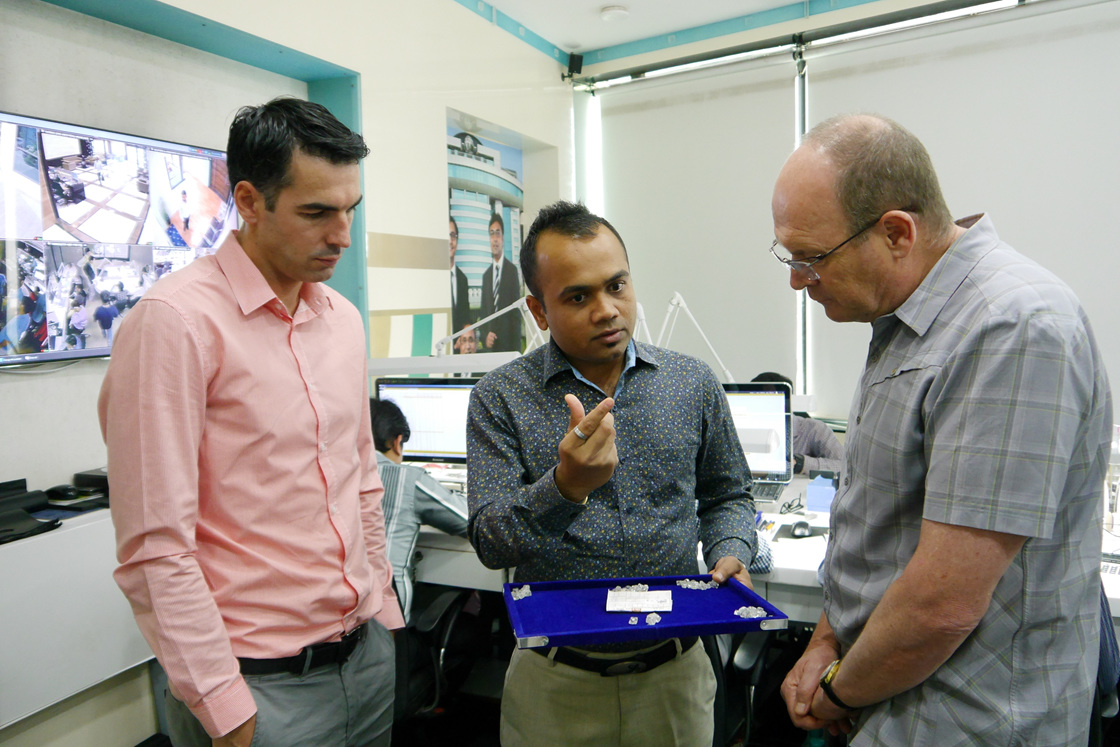 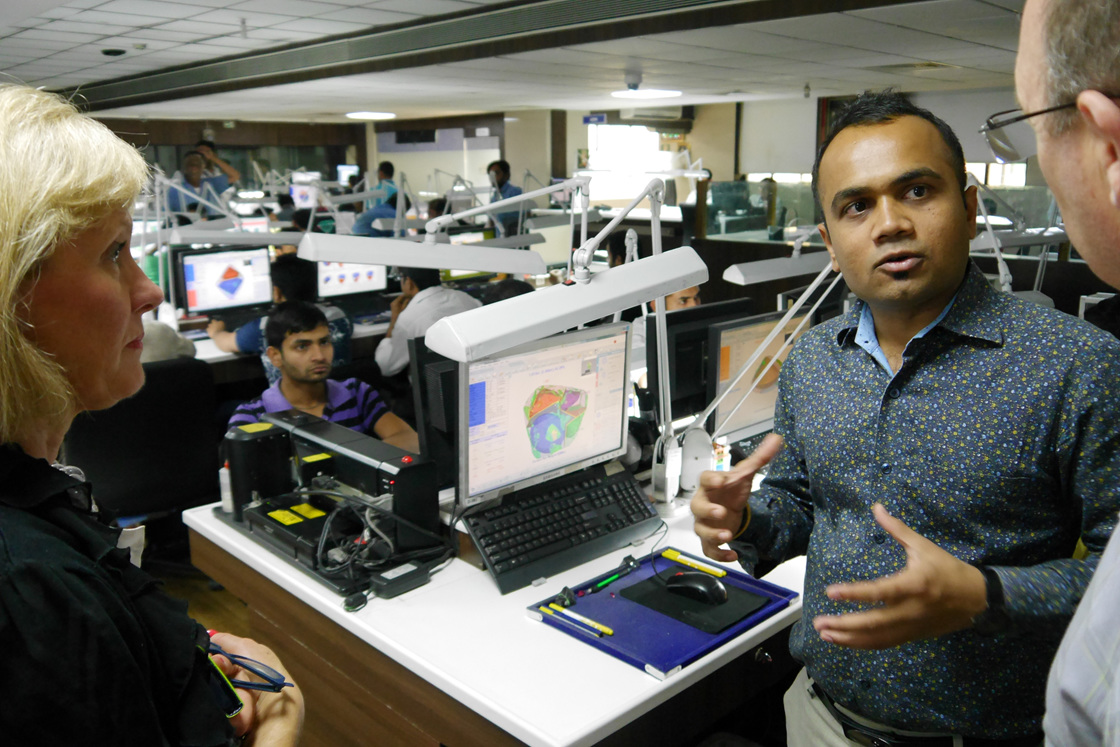 If you are looking to design and craft a piece of jewellery and have any questions regarding our stance on lab-grown vs natural diamonds which isn’t answered here, please feel free to get in touch and we will gladly discuss this with you.