When clay meets gold... When a potter whose trademark style can be described as organic, asymmetrical and contemporary, is getting married, you can bet their wedding ring will be anything but straight, sleek and traditional. Our master jeweller, Ben, was given the opportunity to remodel avid potter Nicky’s existing rose-cut diamond ring, into an extraordinary wedding ring design.

Nicky brought her original ring to The Village Goldsmith with the request to design a contemporary and unique wedding ring in a way that could feature her heirloom diamond. The ring which held the heirloom diamond, was originally Nicky's grandfather's wedding band. When he passed, the band was split down the centre so that a diamond could be set into the design for Nicky's grandmother to wear. After her grandmother's passing, the diamond ring was bequeathed onto Nicky who wanted to reset the diamond into a new design for her wedding ring. Nicky's wedding ring also pays homage to her grandfather through a yellow gold accent, reflecting the original and classic yellow gold of his wedding band.

After first hearing Nicky’s story and design brief, Ben got to work sketching a variety of abstract diamond ring designs. Nicky saw the six design concepts and decided on one that was a curved band of platinum, graduating from narrow to wide, and the diamond would sit where the two ends met. She wanted the aspect of yellow gold, the tribute to her grandfather, to sit on top of the wider side of the ring’s shank.

Once the design was chosen, Ben determined how best to craft the ring in order to achieve the rustic and uneven style of wedding ring Nicky was after.

There were three main components to this ring; the platinum band, the diamond, and the yellow gold feature. To begin the crafting process, Ben started with a block of platinum.

He rolled the platinum out carefully to ensure one side was wider than the other, as per the design Nicky had chosen. Once he had rolled the platinum block to the desired widths, he cut off the unnecessary length and began bending the band around a ring stick. 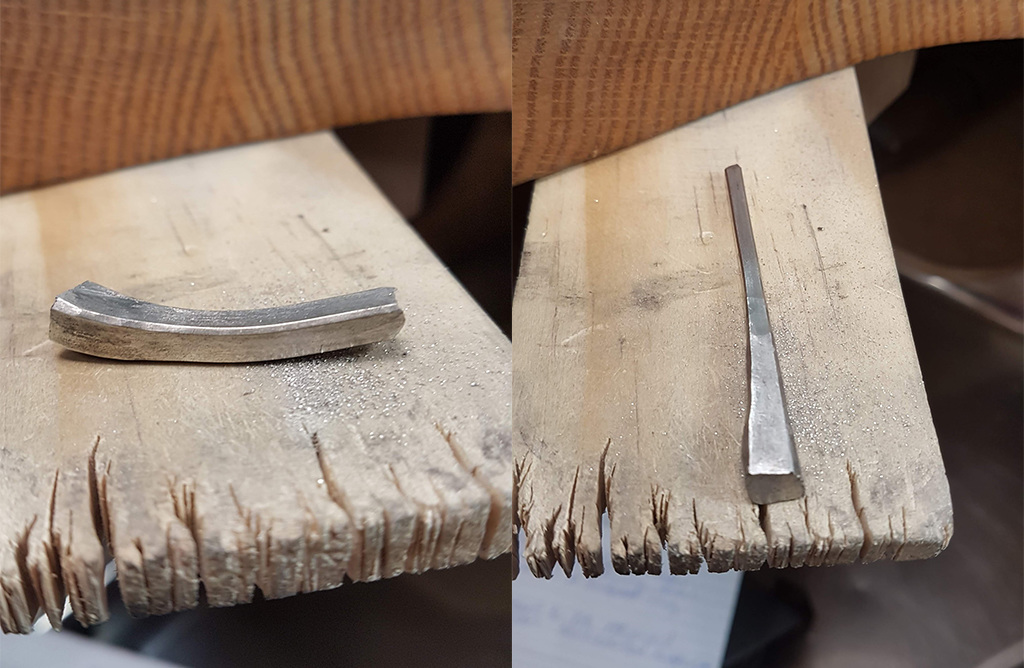 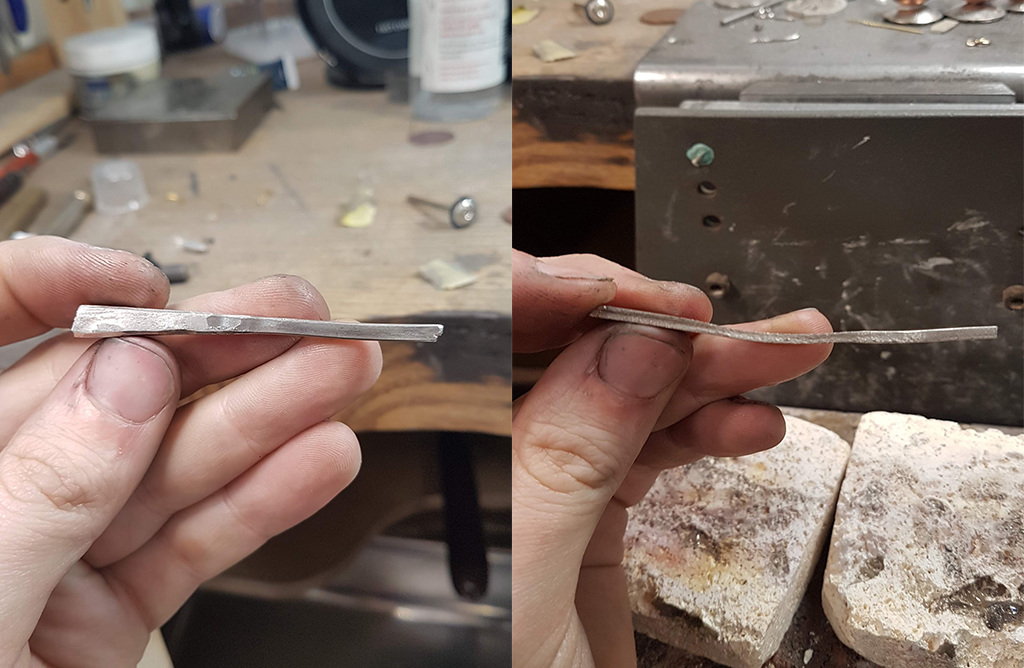 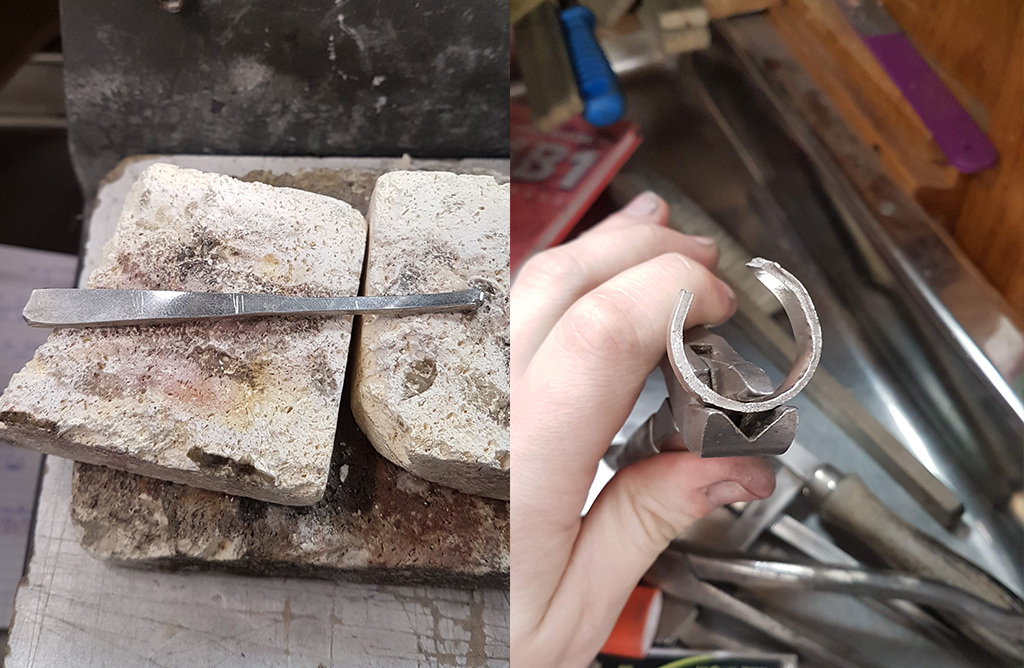 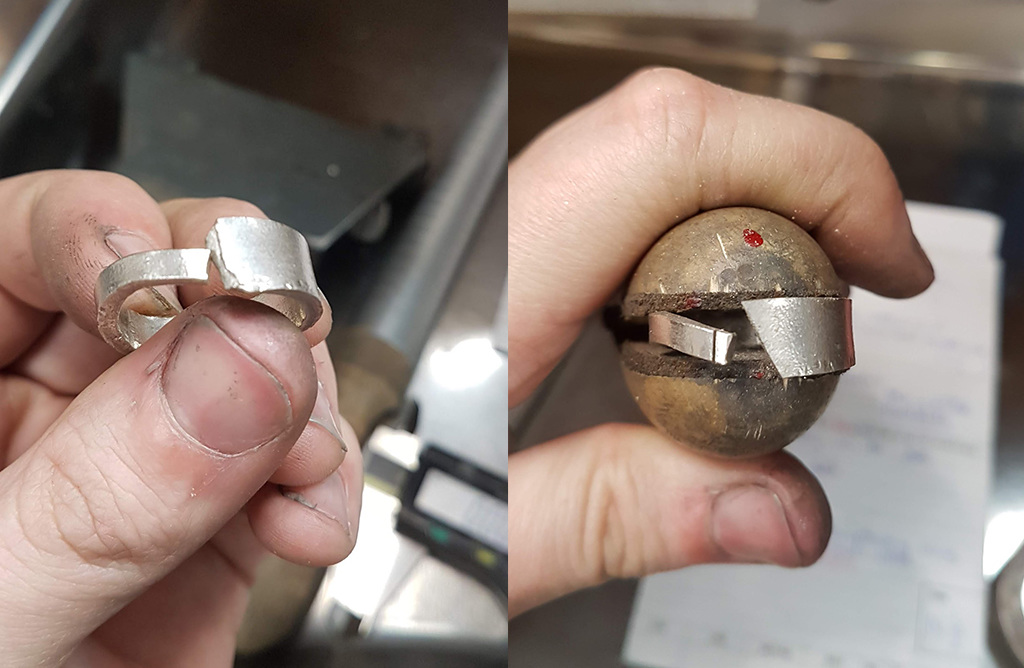 The platinum off-cut would then be used when it came time to craft the diamond’s bezel setting. The piece of platinum was bent into a circle the same size as the diamond, so that it would easily slot into place. 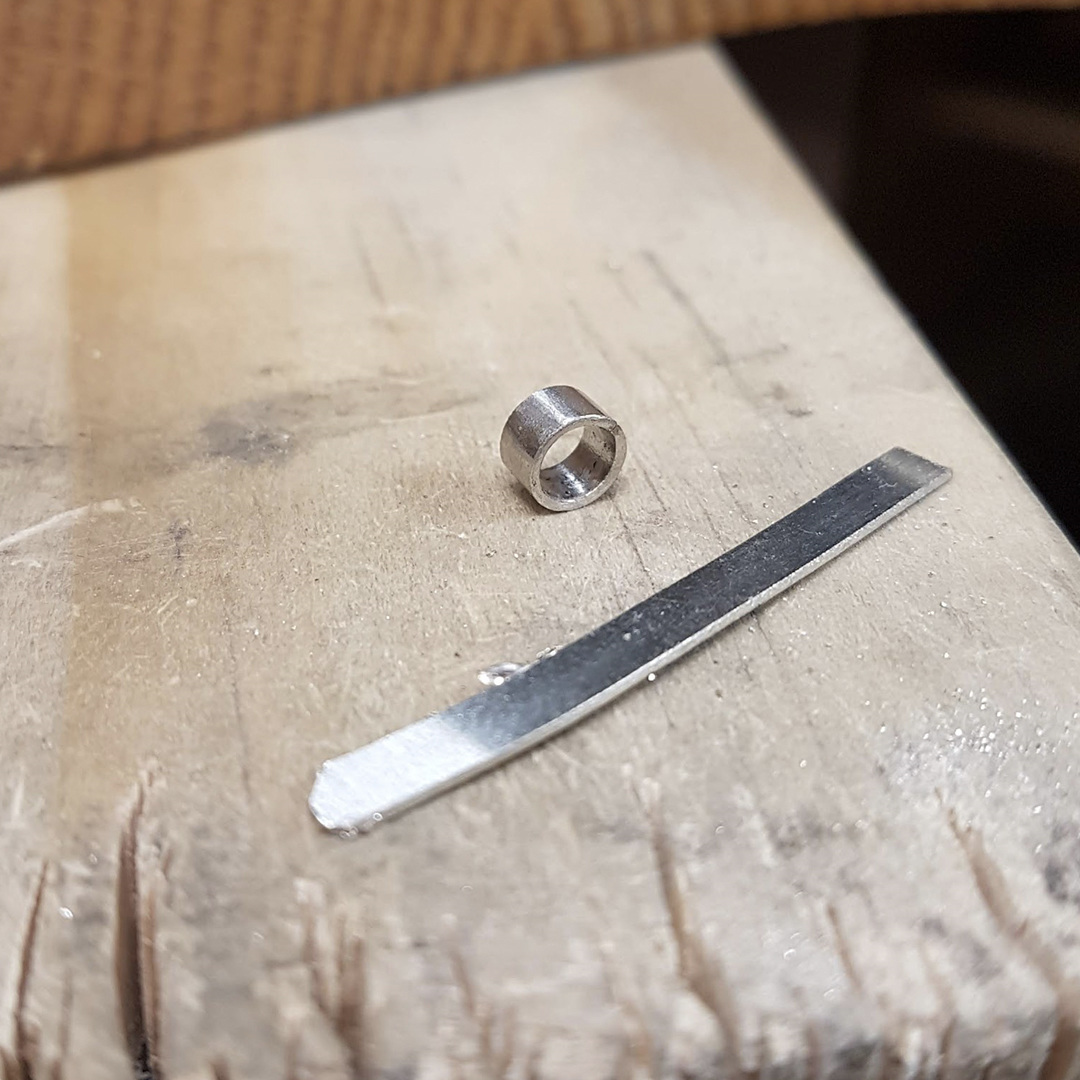 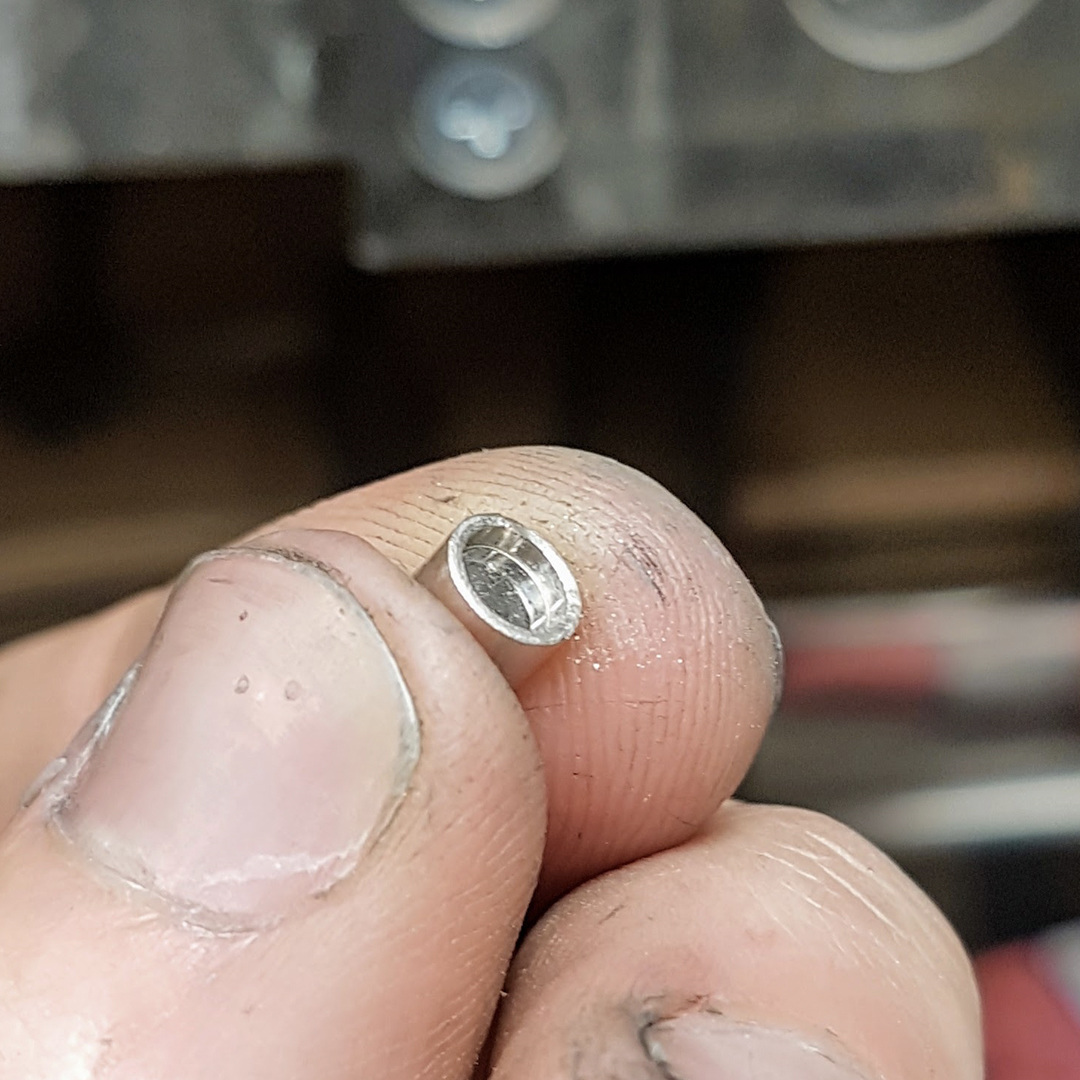 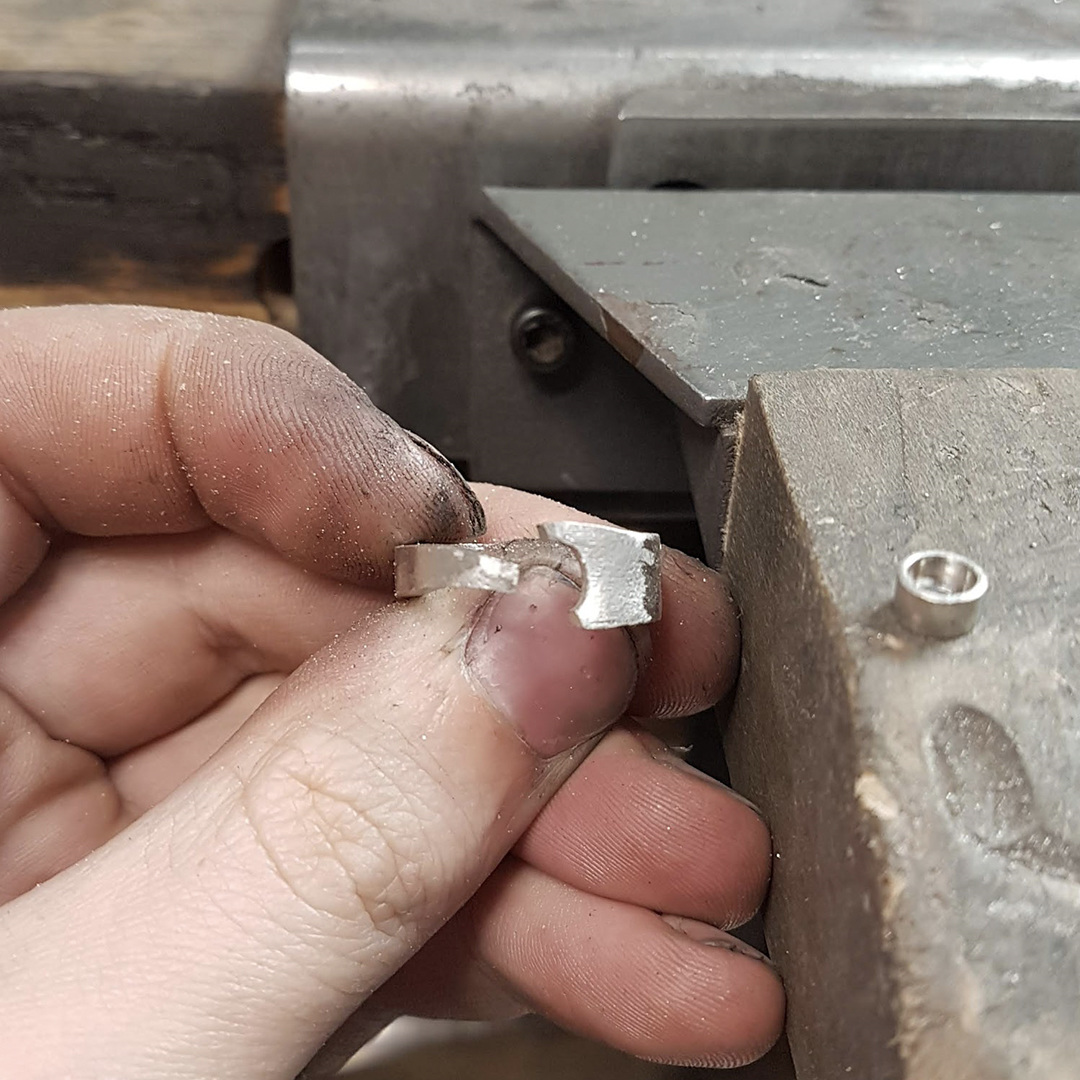 When Ben was removing the diamond from the setting in Nicky's original ring, he noticed there was tinfoil placed beneath the bottom of the diamond. The jeweller who originally crafted the ring would have used this trick because the diamond is rose cut, this is sometimes done in order to emphasise any light that shines through.

Instead of putting tinfoil underneath the diamond setting in the new ring, Ben placed a disc of platinum beneath it. This way the light reflecting through the diamond would be emphasized as much as possible by the suitable precious metal, platinum, rather than tinfoil. 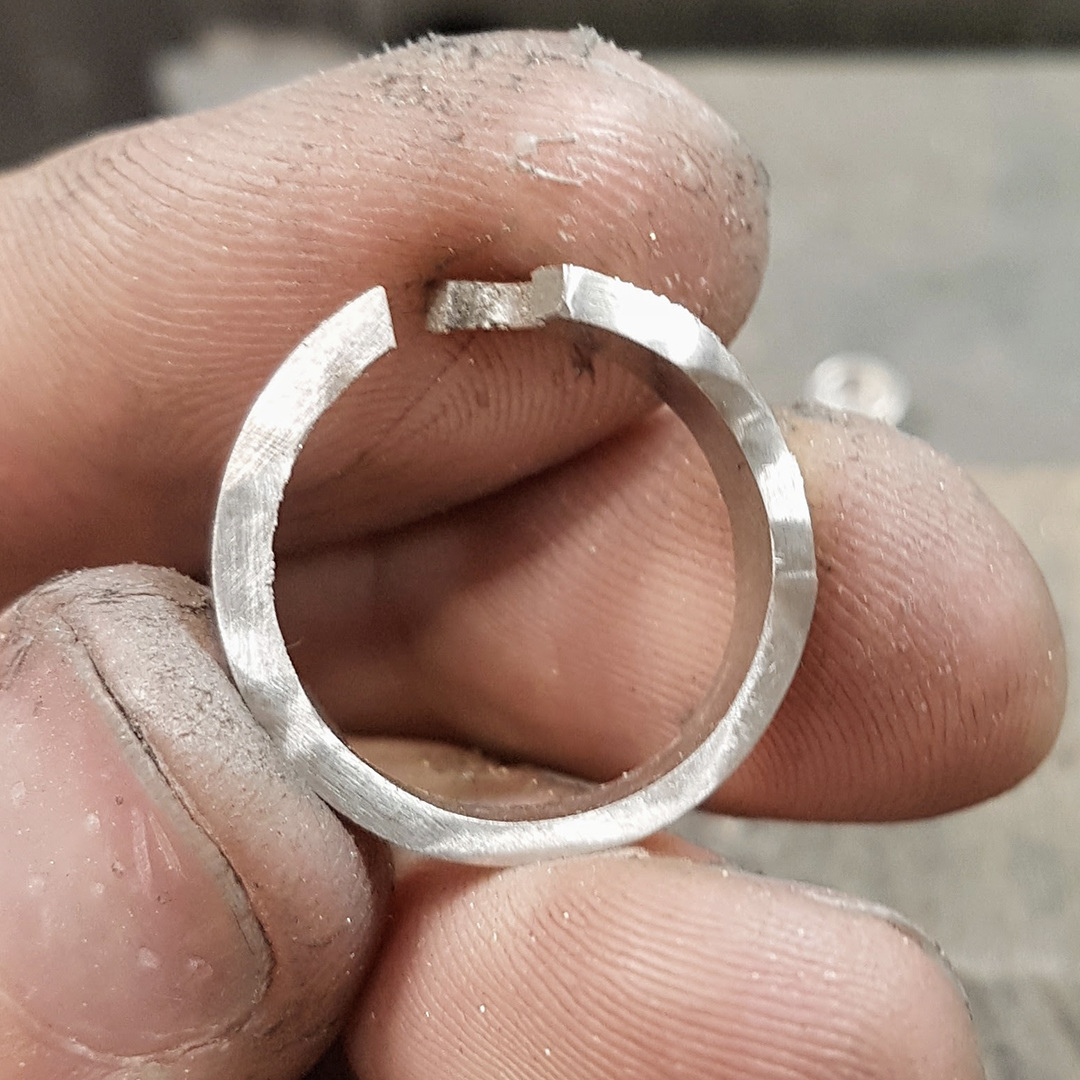 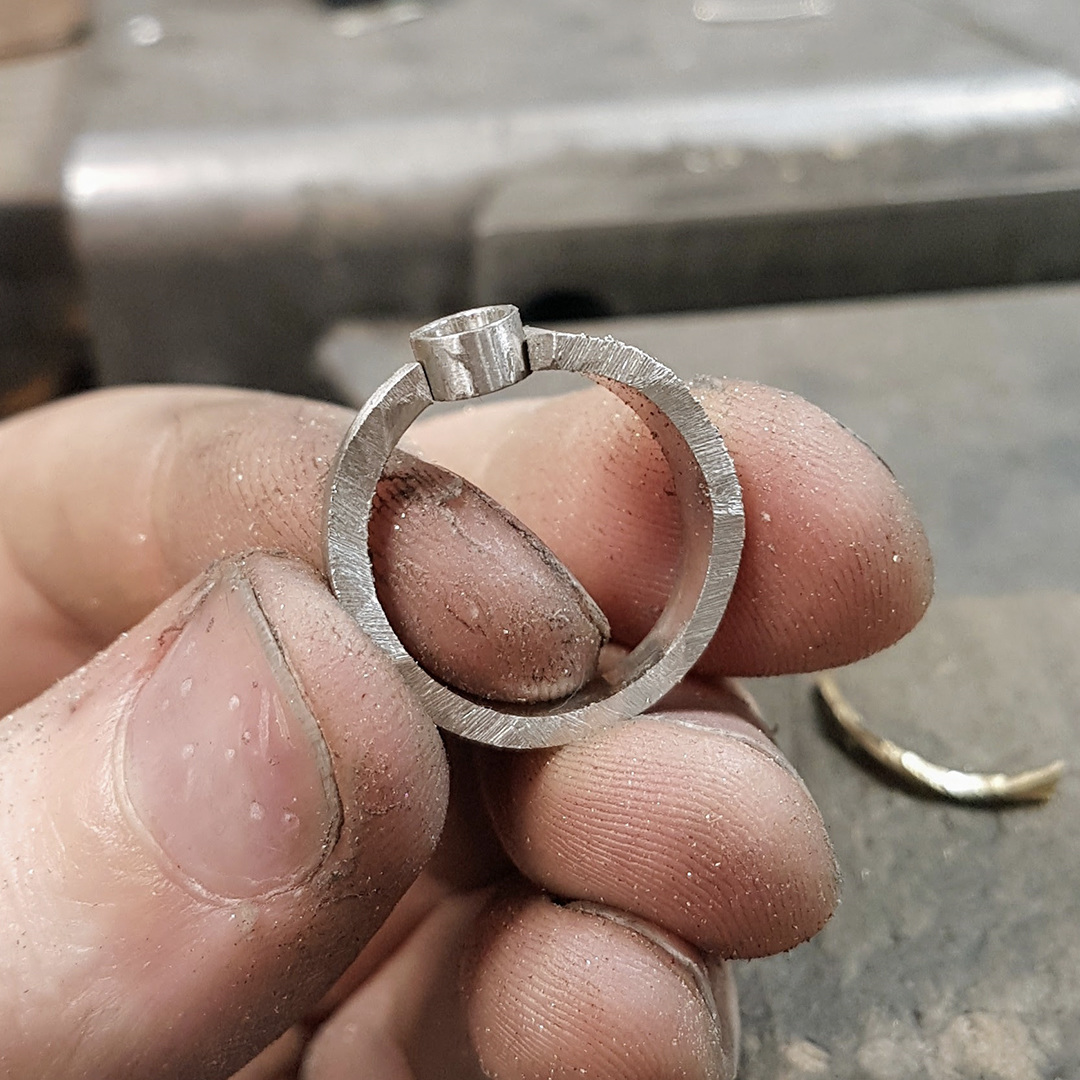 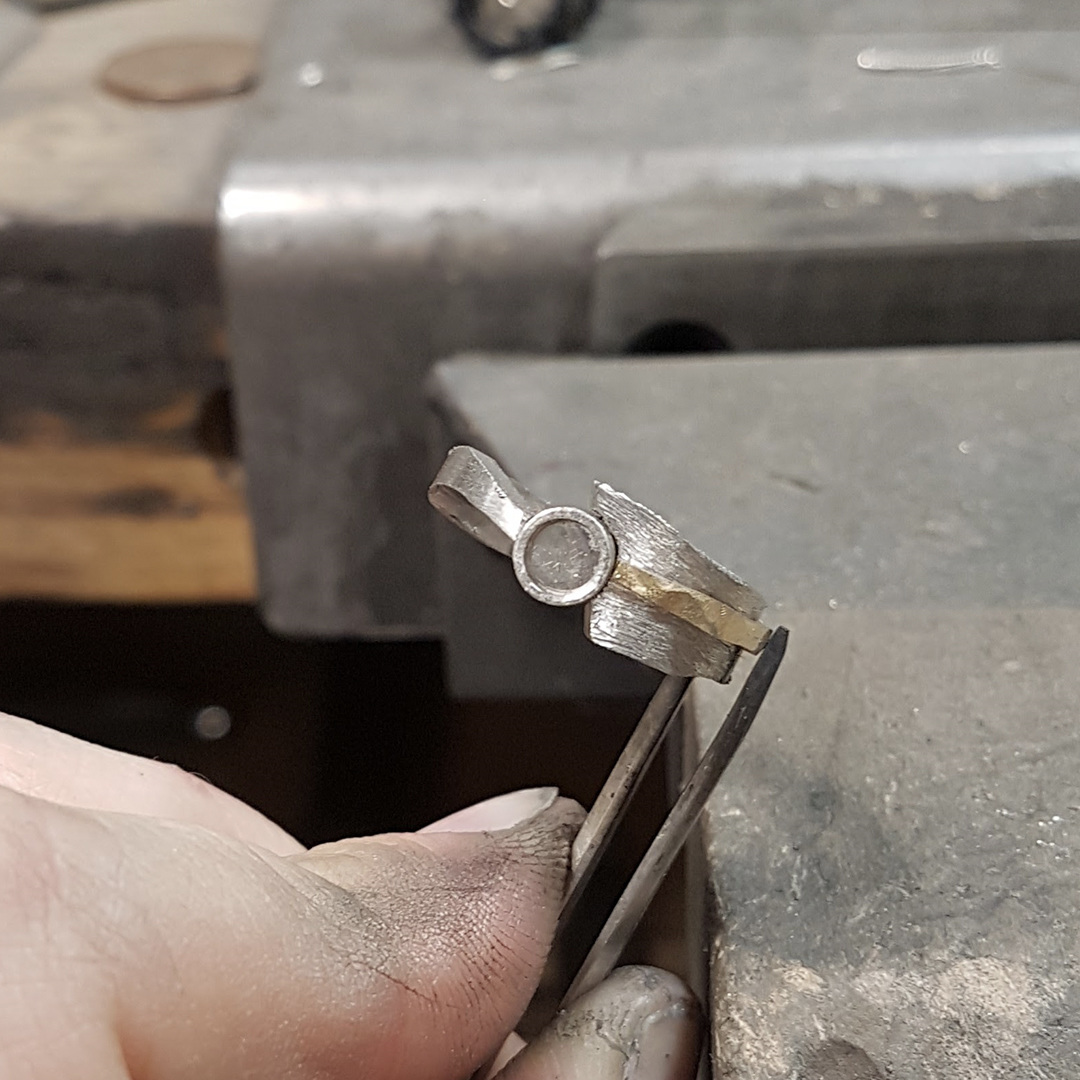 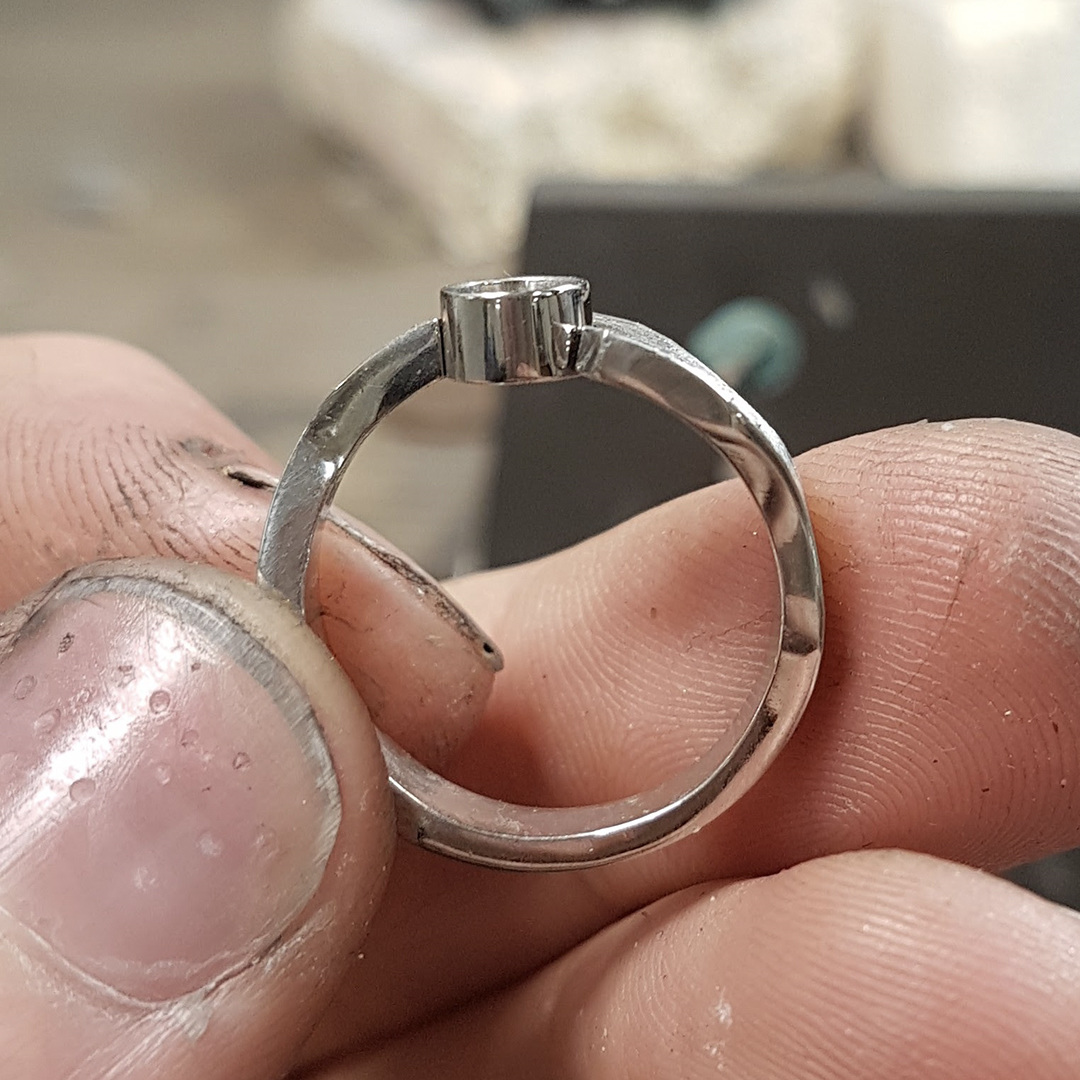 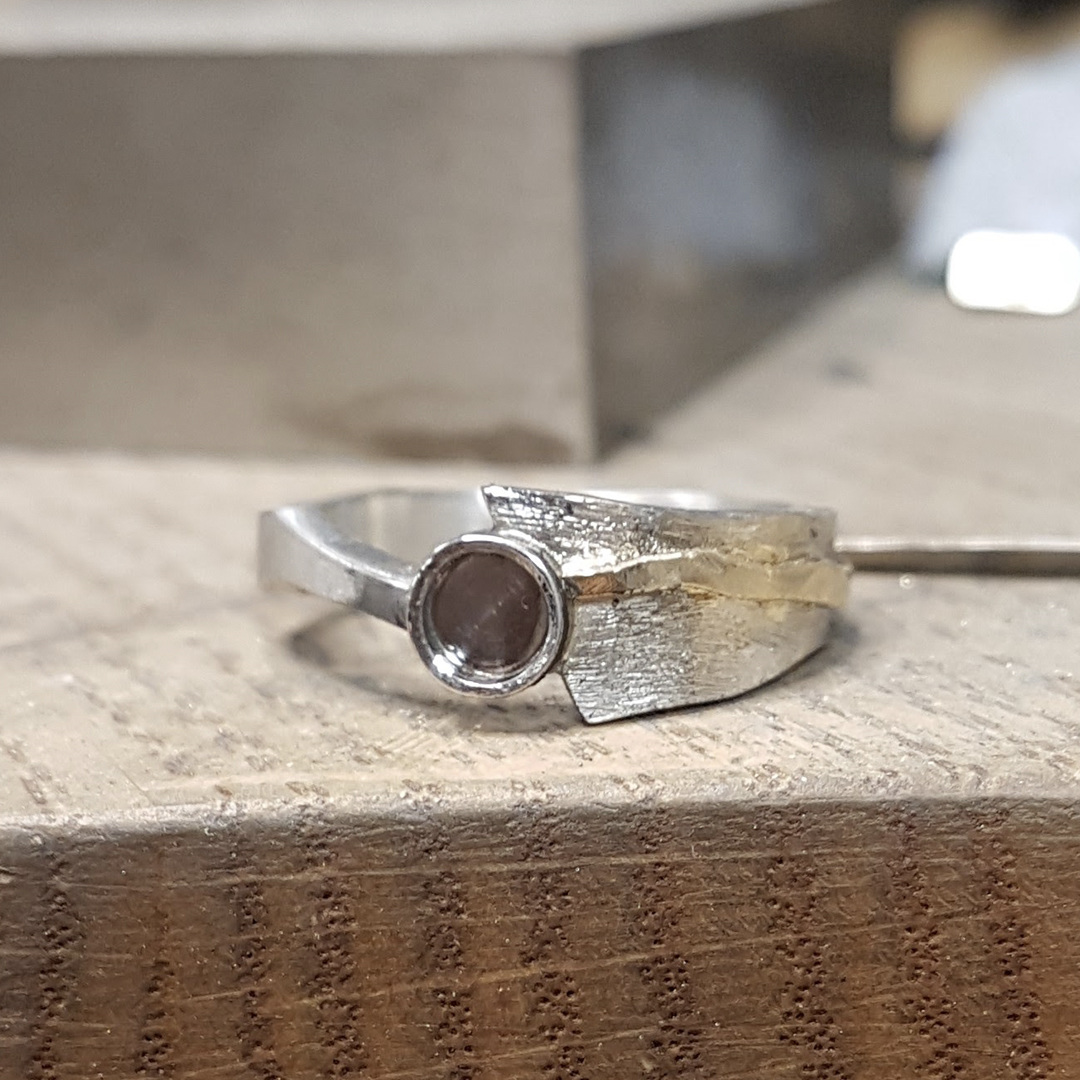 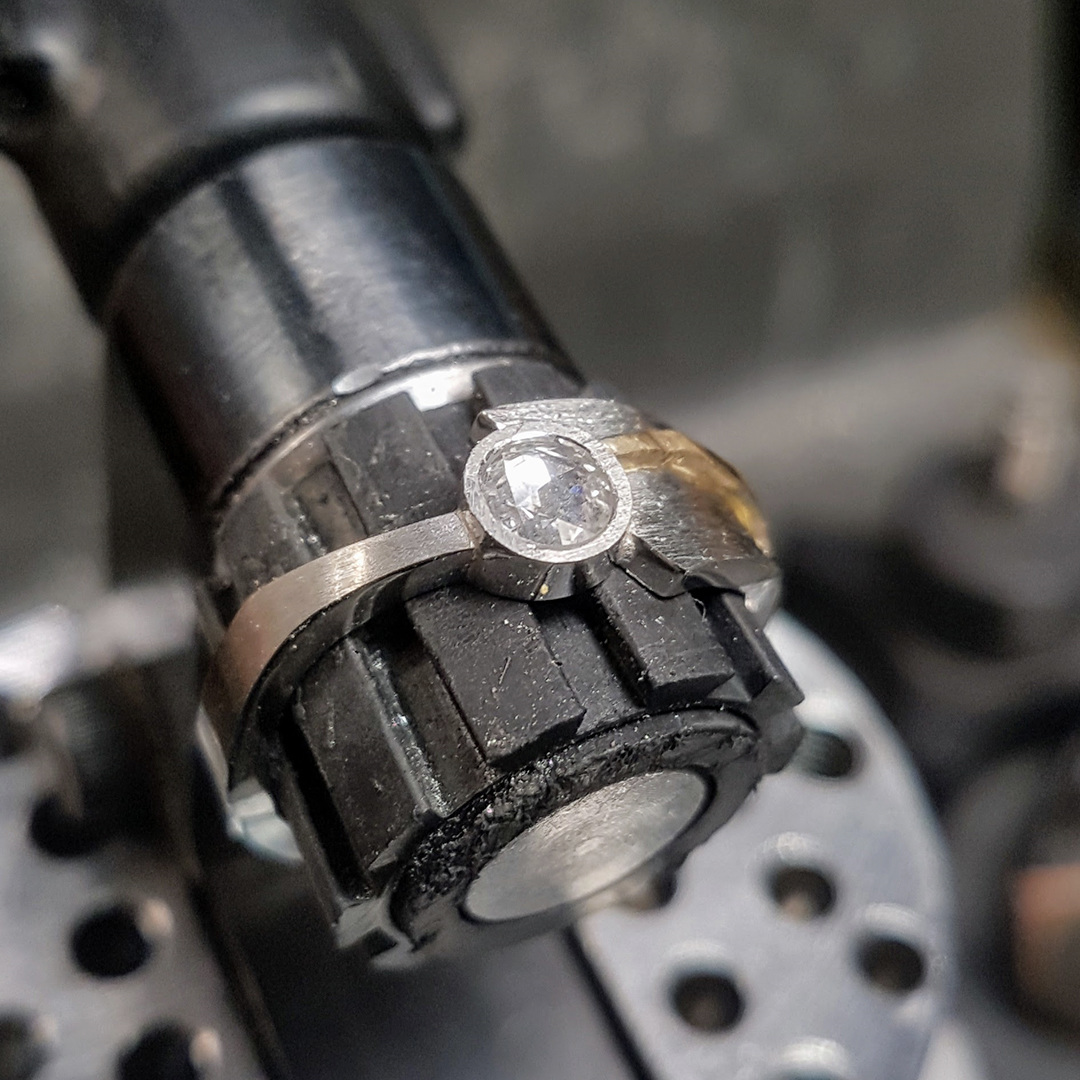 Once the ring was bent into shape, the diamond slotted between the two ends of the ring, Ben got to work creating the two-tone feature of the ring by rolling out a piece of yellow gold.

Once each aspect of the ring was crafted it was temporarily put into place by laser welding. This meant Nicky could see what the ring would look like upon completion. Nicky met with Ben and viewed the ring. She thought it was great... but needed to be much more jagged and uneven to reflect her trademark style.

After their meeting, Ben began filing the metal into a further unevenly shaped edge. He did the same with the yellow gold aspect, making it more organic and flowing. The wider side of the ring was purposely given a rougher texture in order to juxtapose with the smaller side, which was sanded slightly smoother. Ben also gave the wide side of the ring a more concave look to add even more contrast and shape to the design.

Once he felt the design, texture and shape of the ring was right, Nicky came in to view it again. She was delighted with Ben’s amendments and gave the go ahead for the ring to be completely soldered together and the diamond set.

Nicky was given complete freedom by her (now) husband, to take the reins and design her wedding ring using her own artistic flair and style. The final product was a hammered and rough, yet contemporary two-tone diamond ring, which stands out from traditional wedding ring styles. As well as perfectly reflecting Nicky’s style as a potter and artist, Nicky now has a unique, one-of-a-kind custom diamond ring, which is completely her own personal design.

It’s the stories behind jewellery that make the pieces so special. Here at The Village Goldsmith it means so much to us when we get to be a part of your story and craft something that will be treasured for a lifetime. If you would like to begin your own custom bespoke or remodelling journey with us, you can find out more and enquire here.

"The legacy of my wedding ring will be passed on to next generations. If the next generation is as lucky as I have been, there will still be the amazing Village Goldsmith to work with them on a redesign to reflect their personalities."